Home>Kickboxing and MMA news and equipment>Olympic Games: Why isn’t Kickboxing an Olympic Sport? 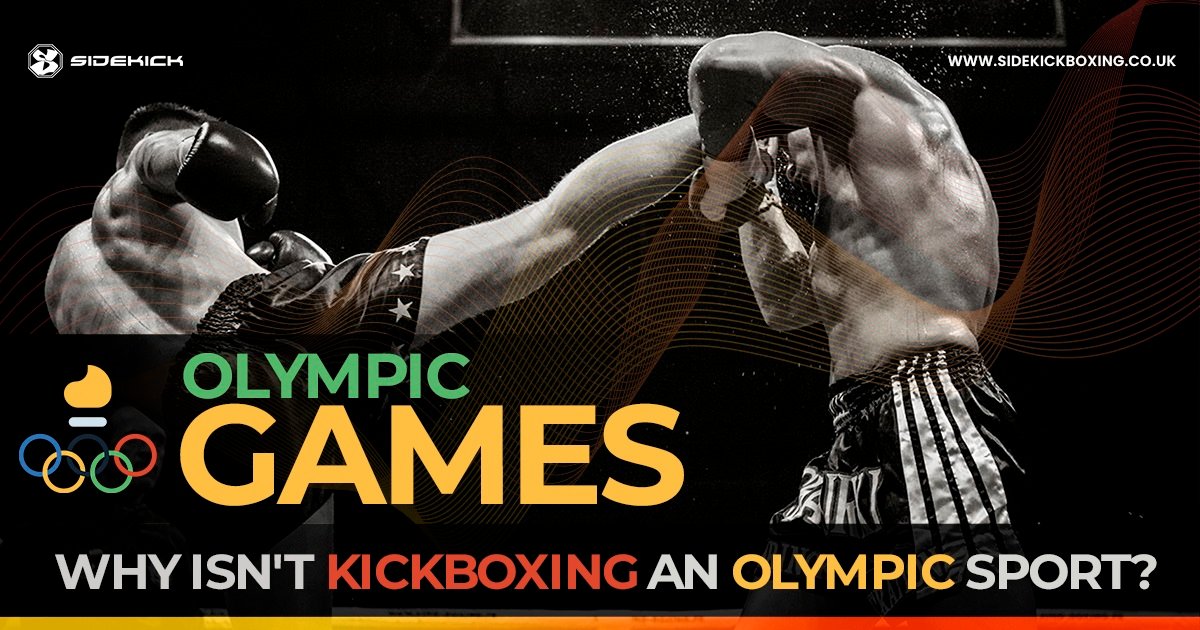 Every four years, the Olympics occur, and every athlete desires to compete for a gold medal while representing their country. It’s not just about adding to the mantelpiece collection or even money; it’s about the remarkable achievement.

However, some sports are not part of this momentous event, such as:
● Cricket
● Darts
● Polo
● Squash
● and even kickboxing

So, this begs the question, why isn’t kickboxing part of the Olympic Games when boxing is? Our article below will detail some of the reasons why.

What are the Olympics?

Every four years, the Olympics is a significant multi-sport event hosted worldwide. The summer and winter Olympic Games are organised by the International Olympic Committee.

Merriam-Webster defines the Olympic games as:
‘1: an ancient Panhellenic festival held every fourth year and made up of contests of sports, music, and literature with the victor’s prize a crown of wild olive
2: a modified revival of the ancient Olympic Games consisting of international athletic contests that are held at separate winter and summer gatherings at four-year intervals
— also called Olympics’

The first Olympic games, known as the inaugural Games, were held in Athens, Greece, in 1896. The summer Olympics feature 50 sports, including basketball, golf, football, and boxing, which have included women’s boxing since 2012.

The 2020 Summer Olympics were set to occur in Tokyo but were postponed in March of that year due to the coronavirus pandemic. When the virus seemed to be easing, it got rescheduled and ended up taking place in 2021.

Boxing in the Olympics is distinct from other boxing competitions in that each fight is split into three 3-minute rounds and a ’round of 32.’ This is when 32 countries compete in a knockout event comparable to the World Cup in football.

Each fight’s winner advances to the following round of the last 16, quarter-finals, semi-finals, and finals. The gold medal goes to the final winner, the Olympic champion. A silver medal and two bronze medals are awarded to the loser or runner-up of the previous bout. Both losers in the semi-finals receive it rather than a fight to determine who wins the bronze medal.

Winning any medal at the Olympics would seem to be a significant accomplishment. Even yet, boxing is exclusively for amateurs; it is merely the beginning of a fighter’s boxing career. Many fighters become pro immediately after competing in the Olympics, knowing that their celebrity will provide them with a solid fan base in the professional ranks.

Anthony Joshua initially rose to prominence after winning the gold medal in the 2012 Olympics.

Unfortunately for many fighters, they will not be able to compete because each country is limited to only one boxer per weight division. Tyson Fury was one of the champions who never got the chance to represent Great Britain because David Price was chosen instead of him in 2008.

Olympic Boxing suggests: ‘Until recently boxing was only contested by men in the Olympics, but in 2012 women competed for the first time, in three weight categories; 51kg, 60kg and 75kg. For the Tokyo 2020 Olympics, there will be five weight categories for wo⁹men and eight for men.’

Many boxing heroes have competed in the Olympics, including:

Galal Yafai, super heavyweight Frazer Clarke, and female fighter Lauren Price are the most recent British boxers who won medals at the Tokyo 2020 Olympics. Frazer, popularly known as the Eraser, was awarded bronze, while Galal and Lauren were awarded gold. Lauren Price appears to be making waves in the professional boxing world since competing in the Olympics.

Who is Lauren Price?

Lauren Price is a professional boxer from Wales, born on June 25, 1994. Lauren is a former footballer and kickboxer who has won four world championships in kickboxing and numerous European gold medals.

Lauren was dropped off at her nan’s house when her birth parents could not care for her at the age of three days. She states that her grandparents’ encouragement has given her the motivation to pursue her goals.

Lauren aimed to compete in the Olympics, and because kickboxing isn’t one of the Olympic sports, she switched to boxing. She had a remarkable amateur boxing career, winning the Olympic gold medal after 61 fights and 46 victories.

Lauren has yet to have her first pro boxing match, scheduled for June 11 this year.

Why is Kickboxing Not an Olympics sport?

Kickboxing’s absence from the Olympics could be due to various factors. Because many people regard kickboxing as a violent sport, the Olympic Committee will never approve it as an Olympic sport because violence and aggression are opposed to Olympic values.

It could also be because there are already fighting sports such as boxing, Taekwondo, and Karate, and there is no need for more. Maybe kickboxing has so many diverse styles and no universally accepted rules. For example, K1 kickboxing, full contact, and point fighting are only a few examples, and each kickboxing organisation has its own set of rules.

However, the Olympic Games also have criteria for the sports involved in the events, with the most important ones being:

It’s increasing its popularity among the younger generations, especially since MMA became so popular (and kickboxing is a significant portion of MMA). Also, there are many female practitioners/competitors, and the sport generates a good amount of income.

The only problem with the criteria is kickboxing’s image. As I already mentioned, many people think it’s brutal because it’s a full-contact sport, and often, there are knockouts, knockdowns and cuts.’

What Boxing Equipment is used in the Olympics?

As Olympic boxing is an amateur competition which is governed by the AIBA, the equipment and apparel used is slightly different to a pro event which you would expect to see on TV. They use only the traditional red and blue colours for all their fight wear to represent the boxers corner.

During those weeks, the spectacle that will take place will go down in history, and Paris will become the global centre of sport and much more. The Games are a famous, multicultural festival that the entire world is invited to attend.

They are the start of a new odyssey that will take France on an excursion unlike any other.

The Official Olympics website suggests: ‘Paris 2024 will see a new vision of Olympism in action, delivered in a unique spirit of international celebration.
We will offer one of the world’s most inspirational cities a memorable stage for the athletes – and a truly global platform to promote them and their incredible stories.

And we will partner with the entire Olympic family to demonstrate that, more than ever after a highly challenging period, the sport has a unique power to help create a better world.’
Source: https://olympics.com/en/olympic-games/paris-2024

Mario and Sonic in the Olympic games

if you are a Nintendo Switch owner and looking for many hours of family fun, we recommend the video game Mario and Sonic in the Olympic games.

This Nintendo Sega collaboration means you can play as any of your favourite characters. The story mode is great to play solo and the multi player is brilliant with friends and family. It features all the combat sport events including boxing, Judo and Karate.

The game was released back in 2019 set for the Tokyo 2020 Olympics, yet as mentioned earlier the real Olympics didn’t take place to the following year.

Olympics is a fantastic global sporting event as with its multi-sports it caters to almost everyone. In the article above, you can see why kickboxing is not part of the Olympic Games. However, I’d love to know your opinions.