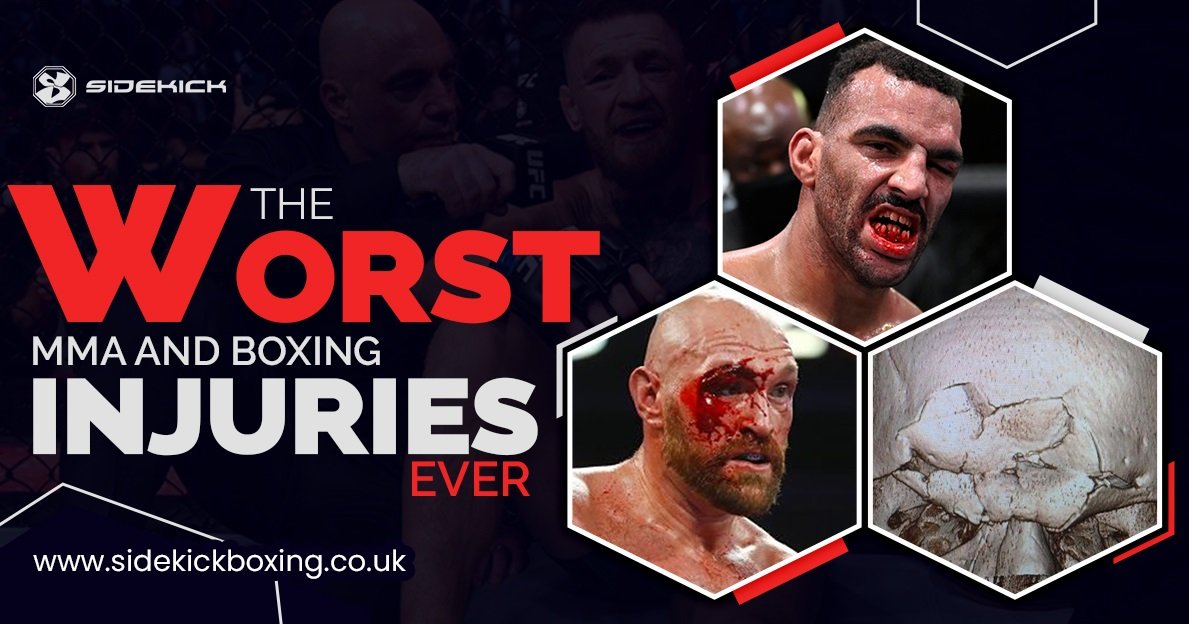 The Worst MMA and Boxing Injuries Ever

Combat sports are considered one of the most toughest sports on earth. They are physically demanding from both the high intensity training and the punishment of getting kicked and punched, that injuries are inevitable. A MMA or boxing injury is the dreaded thing for any fighter, whether it be in training or competition, getting an injury will only force a fighter time out to recover and potentially hold back their career.

In every combat sport they all will have a lot of the same common injuries, many of which are not considered dangerous. However, some injuries can be very serious and may require immediate medical attention. Also, each combat sport may have injuries that only occur in that sport.

For instance, you wouldn’t expect to get a leg broken in a boxing match, but you would in a kickboxing fight, and crazy enough, kickboxers and MMA fighters have actually broken their own leg while performing a kick on their opponent. This happened to UFC star Conor Mcgregor in his last fight.

It is very important to always use the correct protection to avoid any MMA and Boxing injuries as they can be extremely painful or dangerous. However, not all pains is always an indication of a MMA or boxing injury.

We will all remember that very first time we walked in to the boxing gym and pushed ourselves to the limit. The very next day we can barely move as it feels like literally every muscle aches. These Sore muscles after physical activity is known as delayed onset muscle soreness (DOMS). DOMS is not considered a boxing injury and a great remedy to help relieve DOMS is a deep heating type of product like a Liniment oil.

So, what are the worst MMA and boxing injuries?

Sprains, strains and tears can be all part and parcel of combat sports. Training fast and hard and a injury suddenly happens when you least expect it. Sprains and strains sometimes gets mistaken for the same thing. A strain is an injury to a muscle or tendon (fibrous cords of tissue that connect muscle to bone). In a strain, a muscle or tendon is stretched or torn.

A sprain is an injury to a ligament (tissue that connects two or more bones at a joint). When a sprain happens, one or more ligaments is stretched or torn. Tears are the ripping of fibrous tissue that can occur in the ligaments, muscles or tendons from similar activities that cause fibers to overstretch, but the diagnosis is more serious and muscle and tendon tears could take multiple months to heal.

A cut is more common in a fight rather than in sparring training as protective headgear is usually worn. A cut can easily happen in any combat sport as it could be from a clash of heads or a heavy blow, and it can easily effect the outcome of a fight. If a fighter gets a cut around the eye, it can force the fight to be stopped from the officials or doctor and the win will be given to other fighter, even though the cut may not of effecting the fighters performance and is happy to continue.

A good example of this is when Tyson Fury fought Otto Wallin, Tyson was winning the fight comfortably, but he encountered a big cut just above the eye and there were concerns of the doctor having to stop the fight. Luckily enough for Fury, they allowed the fight to continue and kept a close eye on the cut.

Bruises often appear when you are punched or kicked repeatedly in the same area. The biggest bruises caused in combat sports are usually when fighters get low kicked in the leg. A fighter who really suffered severe bruising in one of their bouts was Urijah Faber when he fought Jose Aldo in their featherweight title bout at WEC 48. Aldo made Faber’s left leg go purple after hitting him with many brutal leg kicks in their fight.

To have a bone broken in a fight you would expect it to be game over for any fighter. It occasionally does happen in combat sports and it has got to be the most unfortunate MMA and boxing injury. It is usually the force of a brutal kick which is capable of breaking a bone. A kick can be so powerful that some fighters can even kick through a baseball bat. Watch the video of Andrew Tate kicking a baseball bat below:

Conor McGregor is the most recent fighter to have suffered a broken bone during a fight as he shattered his left tibia and fibula in his UFC 264 fight with Poirier. It is believed the break was caused from Mcgregor kicking Poirier’s knee and round the back of his leg before it gave way when he stood on his left leg.

This isn’t the first time a leg break like this has happened either, as it also happened to UFC legend Anderson Silva when he fought Weildman in their rematch on UFC 168. Silva performed a leg kick but unfortunately when Weidman checked it, it caused Silva’s leg to break. Many wondered if Silva (38) would ever fight again. Another bone-breaking incident is when Robert Whittaker breaks Cannonier’s arm in a UFC fight with a kick in the first round.

This kind of fracture usually appears in your metacarpal bones. If you punch regularly with a lot of power, you will incur damage to the bones between the little fingers and the ring. If you have bruising around this area, it makes a lot of sense to go to a physiotherapy specialist. Boxer’s fracture symptoms can include bruising, swelling, pain and your finger can even look pink and bent. Roughly, 20% of fighters end up dealing with this issue at least once during their career.

Boxer’s Knuckle is an injury to the structures around the first knuckle of a finger, also known as the metacarpophalangeal joint (MPJ). The skin, extensor tendon, ligaments, joint cartilage, and the bone of the metacarpal head may all be involved.

There can be various injuries to the eye and some can be extremely dangerous as they can leave a fighter blind. There has always been concerns about fighters getting poked in the eye, especially in MMA bouts as they use fingerless gloves. Read our article ‘Eye poke: How can they be stopped in MMA?’ here.

Let’s face it, everyone hates the visit to the dentist. That is why it is specially important for fighters to wear a gum to protect their teeth. A nasty dental incident happened to Devin Clark when he fought Moldovan Ion Cutelaba in their UFC light heavyweight fight. Devin had his teeth smashed in his bottom front teeth were knocked out of place. He had to get them pulled back in place and fitted with temporary braces.

A fractured skull is very uncommon in a fight, however when Michael Venom Page fought Evangelista Santos also known as Cyborg in a MMA fight, he did a flying knee on Cyborg to the top of his head. The monsterous strike fractured his skull and left a dent in it. This horrific injury required surgery. Although he hasn’t felt any ill effects after going under the knife, Santos wanted to hang up his gloves to reduce the risks of getting hurt again.

There are many ways to get a concussion from combat sports and it is a severe type of injury. Concussion is caused by repeated blows to the head. The boxing concussion symptoms can surge from the brain moving around inside the skull, putting the person in a confused, sometimes dazed state. After many fights, if a fighter has suffered a lot of head injury, they may be immediately admitted to hospital to get themselves checked.

Many boxing fans will remember the era of the tragic stories of the fights between Nigel Benn vs Gerald McClellan and Chris Eubanks vs Michael Watson. These epic fights have gone down in history for both the good and the bad. Both fights were complete wars but sadly both McClellan and Watson suffered life changing brain damage in their bouts which raised lots of concern about the safety of fighters in the 90’s.

Watch the full fight of Nigel Benn vs Gerald McClellan below:

Combat sports can be a dangerous game at times that it is important that fighters do what they can to prevent injuries. Also, a fighter suffering an injury can cause a fight to be stopped, which even though the loser may not be happy with the decision, a fighters safety is more important. As the saying goes ‘They will get to live to fight another day’.